Where are the Moral Limits of Helping the Hungry?

Part IIX of the Descendent of the Hyena Series.

Over centuries, many societies have come up with mechanisms that reduced seasonal hunger of its citizens. Transport networks, agricultural technologies, storage and information on surpluses and shortages of food crops in various parts of a country all ideal mitigate the impact of hunger and hopefully prevent starvation of its populations.

However, systems and technologies no matter how sophisticated and right meaning depend on solidarity on all levels. For Anti-hunger policies they need the resolution of the powerfull to enable the voices of the communities that are subjected to the massive destructive forces of seasonal hunger and its aggravating factors – poor health, lack of access to resources conflict and so for.

Examples of success as plenty: massive relief interventions, public works programme, agricultural extension workers, relaxation of taxes to stimulate trade and lower prices. Social arrangements to redistribute food, assets and relief from the rich to the poor exists on the national and international level. Humanitarian is on an upward trend with record budget of US$27.3 billion for global humanitarian assistance for 2016

The question of who is “deserving” of this help, remains a contested topic. Those in power accept a moral and legal duty to protect poor and powerless against the worst and often focus narrowly on the prevention of starvation death while neglecting other forms of hunger and malnutrition. The concepts of vulnerability have evolved over the past decades for sure. The same sharp but the ultimately false distinction between “starvation prevention” and “hunger prevention” prevails today. An especially poignant question as the number of displaced, conflict affects and climate change affected populations raise quicker than the funds available to respond. Is the global moral responsibility limited to starvation or the much higher sum of death and distress caused by annual cycles of hunger which is mostly ignored?

In this March 22, 2016 photo, infant Udai Faisal, who is suffering from acute malnutrition, is hospitalized at Al-Sabeen Hospital in Sanaa, Yemen. Udai died on March 24. Hunger has been the most horrific consequence of Yemen’s conflict and spiraled since Saudi Arabia and its allies, backed by the U.S., launched a campaign of airstrikes and a naval blockade in 2015. # 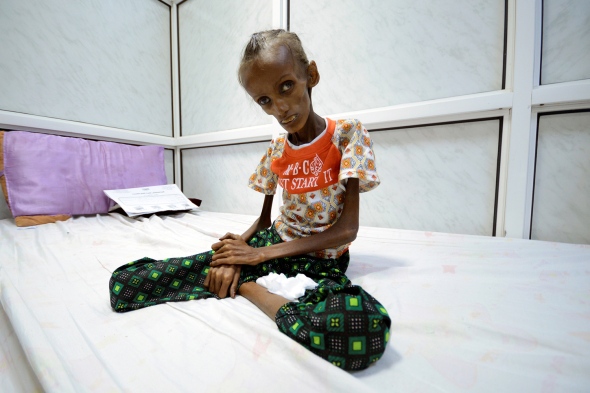 Saida Ahmad Baghili, 18, who is affected by severe acute malnutrition, sits on a bed at the al-Thawra hospital in the Red Sea port city of Hodeidah, Yemen, on October 24, 2016. Reuters followed Saida’s story after this, and on December 6, reported, “Now, after weeks of specialist hospital care in the capital Sanaa, though she can still barely speak and sometimes finds eating more difficult than ever, she can at least smile.” Nearly two years of war between a Saudi-led Arab coalition and the Iran-allied Houthi movement has deepened the plight of Baghili’s family and millions of other Yemenis. In her parched village on the Red Sea coast, impoverished residents have long struggled to put food on the table. Doctors believe Saida’s condition—which began several years before the war began—has damaged her throat, and when her family first brought her to a regional hospital in October, she could barely keep her eyes open or stand. “We admitted Saida to find out the cause of her inability to eat, and it’s clear that she suffers from severe malnutrition,” Doctor Wasfi al-Zakari of Sanaa’s al-Thawra hospital said. “Her health remains chronic, and her bones remain fragile due to stunted growth. In all likelihood, they will never return to normal,” he said. #

Hargeisa, Somaliland – Vast regions of Somaliland, the autonomous territory that declared independence from Somalia in 1991, but has not been internationally recognised, are enduring one of their harshest droughts in two decades.

As the wet seasons have grown increasingly erratic and the rainfall more sporadic over recent years, thousands of herding families across the remote coastal Awdal and Galbeed territories have been pushed into crisis. link

Bollywood and Nollywood have yet to see any humanitarian work of note. During the 1990s when starvation nearly wiped out many of the children in Ethiopia, it was an English Man Bob Geldorf and an American, Bono, who got fellow artists together to sing “Do they know it is Christmas”.
There was not a squeak from India and Africa. Ebola is here now and these same two musicians – Geldorf at nearly 70 and Bono – are again in the forefront raising money for Ebola victims. – See more follow link

the atlantic 2012 the year in photos

A mother holds her malnourished child at a therapeutic feeding center at al-Sabyeen hospital in Sanaa, Yemen, on May 28, 2012. (Reuters/Mohamed al-Sayaghi) #